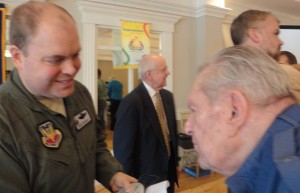 Lt. Col. Jeffrey Haynes leads the 77th Weapons School of Dyess AFB. Today at my Rotary club he presented one the most interesting programs I’ve heard for a while. But the permanent takeaway for me was simple. His is an intensive effort to train a few officers each year, preparing them to become graduates of the Air Force Weapons School. His purpose is to create leaders among leaders, to graduate people able to build, teach and lead.

Humility creates someone who can build lives. We’ve all known teachers who boss the class — and the other kind, the ones we know love the students, who don’t set themselves above the class, but as the sculptors or carpenters, building in the character traits most useful. Anybody can strengthen another up by actually listening and caring about the other, avoiding being centered in self. If the person feels loved and important, the building is occurring.

To teach, we must be approachable? The professor whose office is available, perhaps not willy-nilly (what does that teach?) but who is willing to visit with students individually, epitomizes this. The mentor who always seems to have time, no matter how busy she is; the pastor sitting to visit with a trio of children with deep childhood questions, piled on piles; the celebrity who meets an admirer and takes time to really visit, to talk, not just offer an autograph and rush off. These people we remember years later – as we do those who epitomize the opposite. Those teach, too, but they don’t make (effective) teachers of those they encounter.

And to learn to lead, we must be credible. Able to be believed; convincing; capable of persuading people. I sat on the bench many years. Certainly I heard plenty of testimony from the witness stand, but far more cases were disposed of one-on-one (or really with four or five people involved). Often with very little real interaction, I got a clear feel for how real the story was, how believable the defendant. Those people I could work with, the ones that I could expect to benefit from attempts to redirect them, to rehabilitate them, were often people of few words, but the honesty, the credibility showed. Some people might turn around after they stand at the bench filled with falsehood, spouting lies. Not many, though. We don’t tolerate lies. We may let them pass, but we remember, and we’re not willing to take direction from prevericators. A credible person can lead; a truthful person is worth trusting, worth following.

I’ll never go through the rugged Weapons School, but I can build, teach, and lead as long as I strive to be and remain humble, approachable, and credible.