Of course my answer is, “Everybody!” But let me tell you about the book and you can see if you and yours are in the group who need to read Writing Toward the Light – A Grief Journey by Laura Flett. No, let Laura tell you in her preface:

My precious son Carlton died. He was the Light of my life, and I was plunged into darkness. I desperately needed to know what happened to him. His life force was no longer contained in an earth body. Where did he go? Who am I now? What is our relationship to be? I began an intense search for him, myself, and the life energy I call God. It was not a thirty-day course with a step-by-step process. I couldn’t put it in neat little categories. I know because I spent a lot of time trying.

I could only pick up my pen and journal. My pen drew a medium black line from point A (what I knew) to point B (something nearby that seemed similar) – a gathering of scattered bits of light, flickers of safety, connection, new life. I didn’t understand this process. When I stopped to analyze it, I only spun in frustration. All I knew to do was gather up the tiny sparks of my past life and hope it would become more illuminating with time.

This was the way I stayed on Earth and did not permanently leave to find my son. As I put one anxious word in front of the other, the pen continued to tell me that I was writing towards greater light and understanding.

I wrote for a while, looking for those flashes and building a bit of courage to venture out for groceries. I bought necessary items at the familiar neighborhood store, then hurried home to write what I had just experienced.

As the pen showed me my successes and progress, I became braver. Its ink began connecting more familiar dots as they appeared: friends, events, places, and ideas. Each connection gave me strength, reminding me who I had been and what I was doing, describing who I am and what I am doing now. I put together this new foundation based on past knowledge and present experiences as I watched, listened, and wrote of my life.

This preface was to be the last piece I wrote for this book before a self-imposed deadline to finish by November 28, 2005. It would have been my son’s 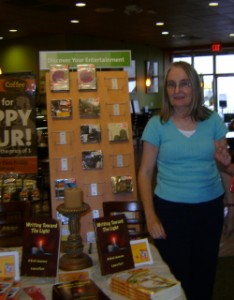 thirtieth birthday. I scrambled, wanting to complete the journey. But the harder I tried to finish, the more unfinished I felt. I had so much yet to learn.In August 2005 before going to Taos, New Mexico, for a writing workshop, I was diagnosed with breast cancer. I didn’t understand. It was not in my family; I was not supposed to have breast cancer. But after a biopsy on a suspicious shadow that appeared on my yearly mammogram, the surgeon called to tell me it was a “favorable cancer.” A favorable cancer? I heard that as an oxymoron. Then he offered me the choice of a lumpectomy with radiation therapy or a radical mastectomy.

“What’s the difference?” I asked.

“Not much. It’s just personal preference. One way is as effective as the other,” he told me.

I felt like I was at Baskin-Robbins, choosing between pistachio almond and chocolate mint, and selected the lumpectomy only because he assured me I could postpone radiation until I got back from Taos. I also began taking Tamoxifen. Ah, the favorable part was becoming more apparent: there would be no chemotherapy.

The workshop in Taos was everything I wanted it to be. Twenty writers burning with stories to tell and eager to find a way to do it. We left New Mexico full of enthusiasm with plans to keep in touch.

But once I was back home I began six and one-half weeks of radiation treatments and soon discovered I hadn’t dealt with the reality of this disease. Every day as I sat in a waiting room at the Cancer Treatment Center with patients in various stages of the illness, I was facing my own mortality. So much of my energy had been spent coming to terms with Carlton’s death. It was now time to look at my own.

The importance of my Taos connection became clearer. I stayed in touch with other writers as we shared weekly experiences and insights. The practice kept me focused and trusting that this was my way to greater understanding.

Then at the beginning of November, four weeks before my manuscript deadline, my mother and brother and I visited my ninety-year-old dad at the War Veterans Nursing Home in Monroe, Louisiana, a hundred miles away. He has Alzheimer’s and we are never sure how coherent he will be when we visit, so Mother showed him family pictures hoping to help him connect to his own bits of light. This only seemed to frustrate him. He had a hard time completing sentences. While we sat in the day room with other men much like him, I listened to his struggle. Then I asked him what was going on. He talked about his mother and father and trying to get home.

“But they tell me not to come the regular way,” he said. “Something’s wrong with that, isn’t it?”

“Your mother and dad are dead,” I said.

He looked a bit surprised, then told me he was afraid the doctors would think he sounded crazy.

“No, Dad,” I assured him. “You’re just watching your home movies. The collection that makes up the unique story of Deane Flett.”

He became calmer and more articulate. Before we left, I bent down to kiss him and he grabbed my hand. His pale blue eyes looked straight into my hazel ones.

“Thank you,” he whispered.

It was a powerful link. I let Dad show me where he was and I understood it. It was his life in review. The same thing I was experiencing, as I wrote my way through this grief journey. I, too, was talking with the dead and reliving my past. I, too, often worried that I sounded crazy. So now I must “finish” this book and let it go. I know that even in published form, it’s still not complete. It becomes, at best, a sharing of my experiences. This part of my journey offered as compassion for others looking for safety, or connection, or new life. I may not be in charge of anything more than that.

I poured out my heart as I worked to be as honest and thorough as I could. With much love, then, I release the book. It is much like my own son. It will go where it needs to go and connect with what it needs to connect.

I know now why I chose his birthday, the date that sometimes fell on Thanksgiving Day, as my deadline to complete this manuscript. I approached this year’s designated-day-to-be-thankful and realized with tears in my eyes that November 28 will always be Thanksgiving Day for me.

And that’s why you need to read  Writing Toward the Light. Because you, too, will have a time, or have had times already, when you are talking with the dead and reliving your past. You will worry that you sound crazy. But Laura can walk the path with you because she’s been along it before. Walk with her toward the light on your own grief journey.

Links to buy on Amazon: