Bettsy has beed kind enough to welcome me into her home after I cut myself severely on my right arm. She picked out this as ideal for me – and means more than the graphic fits. Bettsy stands beside me and keeps hers hands off the struggle of the moment, muttering, “She’ll ask for help when she wants it.”

I must admit it’s not a new phenomena. Hospitalized at three and again at five with pneumonia, I’m not sure which time led to the story, but my parents would talk as long as they were telling tales on me of my reporting from the hospital bed with a temperature of something like 105, “I’m fine. I’m just fine.” 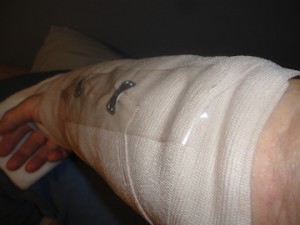 I come by it naturally. Mother, Alma Ellen Anderson Breedlove, at the time of the age-five pneumonia, had Mary Ellen who was nine and Carol, two, when the visitors left my fifth birthday party and Mary Ellen broke out with measles. Carol and I got that as well as chicken pox and mumps brought home from school, someone being sick from January until Easter. Daddy travelled West Texas and New Mexico, leaving Mother with her hands full. Only when I was hospitalized and Carol was home with the illness du jour AND a heart murmur did Mother call in Grandmother for backup.

The self-reliant women didn’t start with Mother, either. While she was playing hospital, Texas saw women as not strong enough to sit on juries, and wouldn’t allow that for three more years. Grandmother, more educated than her husband (who would become a phenomena in his profession) could mother Aunt Lorice and Mother while keeping books for her husband, but until 1918 couldn’t vote – and that only in the Texas primary, not the general election.

Women in the family stood strong long before that. Maria Pells, wife of Allert Heymans Roosa petitioned the English occupying army in New Netherlands as reported in court records: (Allert and Maria were 5th great grandparents to Grandmother’s husband, Joe Holt Anderson, Sr., I think. It’s hard to count generations with just one hand. See further at my genealogy, http://sharpwriters.com/genealogy/dutch.html#roosa).

The wife of Allert Heymans requests that Mr. Berrisfort be pleased to relieve her of the people he brought into her house. To which Mr. Berrisfort answers, saying, as soon as her husband Allert Heymans will again allow himself to be found at home, he will then relieve her of this trouble. And he intends to arrest her husband and to take him to the redoubt until the arrival of a yacht then to send him to the Manhatans to the Governor General, for the purposes of there answering any accusation which they, the soldiers, may make against him.

The hon. court proposes to adjust the affair between Allert Heymans and his soldier here before the court, as per instructions, and in the mean time, to keep him under arrest in his own house, with orders for him to keep silent and quiet until the arival of a vessel, then to go to the Manhatans to answer there, in case the difference cannot be adjusted here, and in case he does not keep still and quiet during his arrest, that he shall be handcuffed and sent to the redoubt.

Anyway, to Bettsy, my sons, Dezi, and others, I know of your frustration. I felt it at Rotary Friday when I was going to start early to “discretely” half put on and half wrap a sweater around me – and JoHan Green got up from the next table where she was sitting with her back to me to help. I do understand, but I could add tales of ancestors like Rosa Berryman Talliaffero Loving, moving west and raising soldiers and preachers after being widowed in the War of 1812, Mary Dudley McKendree raising doctors and the first American-born Methodist bishop from an invalid’s bed, Nancy Spence and her mother fighting off a Comanche raid in a log cabin…. Independent women run in my blood, what’s left of it after spilling a good pile.